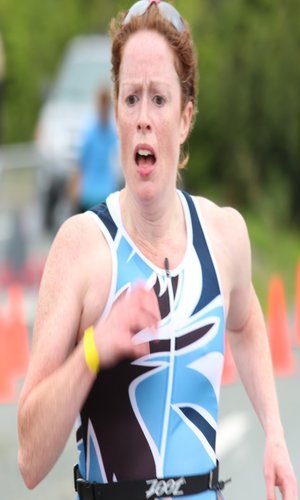 My running history is pretty low key. I was on my high school cross country running team, I was in the “B” squad and I was ok with that! There is an embarrassing Roncalli yearbook picture of me grinning away with the rest of my (considerably more talented) team. After graduation, my running career went on hold for many years.

I started to love running in 2010 when I started training for my first Tely 10. I was speaking to some coworkers and they inspired me to have a go at it. It turns out the long slow training run is just the thing for me, the pace is perfect and I love running outdoors so much – I started to clock some serious distance and lost some weight to boot. The major motivator for me was preparing for races. Once I got my head around trying to beat my own fastest time, races were no longer intimidating – they became exciting!

I’ve run three 8k races, three Tely’s, a half marathon, a Cape to Cabot and a sprint triathlon since 2010 and I plan to keep doing this until I’m at least 85 years old.

Since I plan running for a long time, it is very fortunate that I have a fabulous running group. Meeting for runs 2 to 3 times a week brings a wonderful social side to running which is so very important: the feeling of community, of belonging to something truly special adds a tremendous amount to my running experiences.

I ran though my second pregnancy and the level of support I have received from group members has been prenominal. I’ve been fortunate enough to instruct groups as well, which gives me an excuse to release my inner cheerleader and also gives me an opportunity to pass along the tips and advice that I have learned from runners along the way. I have a five year old daughter and she is convinced that every lady I speak to in CBS is a runner – and you know what? The majority of people I chat with when I’m out on errands ARE runners! How awesome is that? What a great example we are setting for our children.

I’m really looking forward to rejoining the group, it won’t be long now. I had a beautiful baby girl recently and we are doing great! My husband bought me a gift to celebrate the birth of our second daughter – a triathlon bike! So for goodness sake, watch out for me on the roads of CBS until I get used to it!